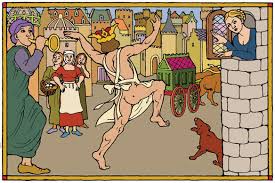 Looking back, that day was doomed to be doomed. I had gotten into my kitchen and my maid was sleeping… SLEEPING! In my father’s house, if you doze off on duty – maid, doorman, guard or even daughter, you’re sure to have the lashings of your life. All of us had suffered it at some point. We were never really pampered because we lived in the palace. All of us except Merab.

Merab was the perfect daughter; she was focused, bright and obviously the apple of Papa’s eyes. Papa always told me to ‘Take a good look at your sister and remember that image forever because that is what a woman who would rule looks like’. Was I jealous? Sometimes. But Merab was a good person – she was not selfish or unkind. When David was the talk of the town and every maiden on every block wanted to have him for herself, Papa went ahead to promise Merab to him if he killed that abomination of a Philistine (I honestly get irritated every time I think of that thing of a man).

Anyway, the day the decree went out, Merab sat on her bed looking white. To be honest, it was a hilarious sight because she always wore perfect clean white sleeping gowns and would always tell me, ‘You can wear purple silk as much all you want, it doesn’t necessarily make you dignitary’. I held my laugh and asked her if she wasn’t happy. ‘I mean,‘ I said ‘It is David! Although only Yahweh knows where he was all the while when all the men were growing, stealing the heart of girls and applying to be part of the army…‘ ‘He was tending sheep. He is a shepherd’ Merab said still looking ahead. I nodded slowly and continued, ‘Yes, exactly. Anyway, he is David. And he has the prettiest face Israel would ever see. I’m telling you. You see that head of hair, imagine running your hands through them. And those eyelashes! I tell you, he was to be a woman. Those eyelashes are not from here…’ Merab turned to me and squeezed her face, ‘You like him?’ I laughed and snorted until I realized she was not joking, ‘Yes, of course. I love him. I’m not as pretty but, ugly girls also dream’. Merab rolled her eyes.

I do not know how what happened and why it did, but all I know is that Merab went in to see Papa the next morning, they had one of their very boring intellectual discussions and next thing Papa was breaking his promise to David and asking him to bring 100 foreskin of the Philistines to have me as his wife. Papa gives the weirdest punishments though. The day Papa called me into his throne room and showed me both my husband and about 200 bloodied foreskins on the floor, I did not know whether to vomit or to cry tears of joy – I loved David.

Fast forward to that day my maid was sleeping in my kitchen. You see, I was already tired. Too much had happened in David’s house. My life had gone from teasing Merab and annoying Papa to hiding my husband from assassins and looking out of the window anticipating whether or not he would come back from his hiding. It was so bad that I did not even have sufficient time with my husband to conceive a child! By the way, Merab, the focused, was already giving birth to boys for that queer Meholathite called Adriel. It was all too frustrating. Please don’t get me wrong, I still loved my husband David. But the thing is, the few times we had together, he was either telling me about how Jehovah was his rock in the wilderness, how Jehovah helped him escape from some men, how Jehovah did this or that. If he wanted to be more romantic, he would pick up his harp and play the psalms he composed… for Jehovah. To be honest, I did not share that enthusiasm. David knew. He would always blatantly tell me, ‘Jehovah comes first. It is smart for you to love Him like me. That’s the only way you can see what I see and we can flow together’. I did not understand him.

Sometimes, my mind goes to Phalti, that idiot. Papa married me off to him when David had gone into hiding for so long. Phalti is the perfect example of someone who cannot see the nose right under his eyes. Everyday in his house, I would tell him about how living with David was, how amazing David was, how much I missed David. He did not mind. In fact, I told him not to touch me; that I was going to only bear children for David and whenever he protested that we were married, I would ask, ‘Did I come to your house with a deed of divorce? Did we wear sack cloths to mourn David?’ And he would shake his head and just hug me until we slept. In fact, the day that David got back to the city and came to recover me, as I watched all the men bustle around in the room picking up my belongings and throwing them into boxes, I shook my head at Phalti as he wept. What kind of man weeps when they come to take your wife??? He even followed behind me crying for all the women and maids to see! I was so embarrassed. And when Abner told him to ‘Get back home!’, he whimpered like a dog and turned around. I cursed under my breath. Men are not to disgrace themselves in the open.

And that was the same thing I told David on that day my maid was sleeping in the kitchen. You see from David marrying other women to Papa dying, many things had changed. But two things had not changed – David was still crazy for Yahweh and I was still childless. After I woke up that maid with a firm slap, we cooked for the coming of the Ark of the Covenant. David had given strict orders to prepare food enough for a large crowd. The whole city waited in anticipation as the Ark was brought in and I had even started talking friendly to the maid about her younger sister who behaved like a lad and wanted to be a brave hunter. We suddenly heard drums and singing. Oh! It was beautiful. The sound of celebration was in the air, you would think that the heavens had come down and the angels were singing. I stood up and looked out of the window and the next thing I saw almost set me off balance. While everyone was dancing, they were also laughing whether in joy or mockery, I do not know, but there was a centre of attraction. David! My husband! He was half naked, I tell you. Twirling around and rolling on the  floor, jumping up, shaking like someone with the disease of the brain. The maidens around stood in pairs and were giggling, the young soldiers, even, had loosened up and were trying to copy his dance steps. The worst part? The sleeping maid beside me was laughing and clapping and saying, ‘Go David’. David! Not king or Lord. It is what I told Phalti – men are not to disgrace themselves in the open.

To cut the story short, David and I exchanged some serious words. Was I sarcastic? Yes. Was I rude? Yes. Did he speak in harsh tones to me? I’m telling you as long as Yahweh is involved, David would do anything. I was so shocked.
David and I were alienated from each other from that day henceforth. He would not see me and he would not divorce me. I realize that records would go down about this, so I want this to go down as well.
One, Yahweh is a consuming fire that you cannot fully consume. I have seen this. I know this. Once he consumes you, you cannot be satisfied. It is what David was experiencing so I do not blame him. You cannot really get enough of Yahweh. I should have let him consume me too. That way, David and I would have been on the same page.
Two, I do not want history to feel pity for me. Because it would record that I never had any children. Yes, but Mareb died early and for some reason that queer Adriel handed his sons to me to take care of. He said, ‘Boys need a mother to be sane and put together’. I agree with him. Although, all the boys later died, I knew what it felt like to take care of children.
Three, I loved David for as long I lived.

Heyy… you just successfully completed a cool Bible story. I bet it was not so bad. To study more about this story, click here, here, here, here and here